The Olympic Council of Ireland has announced a team of 40 athletes to represent Ireland at the European Youth Olympic Festival in Gyor, Hungary 23rd – 27th July 2017.

Bearach Gleeson has been selected to represent Judo at the EYOF and will be accompanied by coach Paul Green. 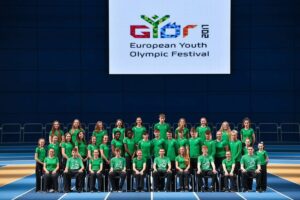 Further details on the EYOF can be found on the website

We wish Bearach & Paul the very best of luck as they represent Team Ireland.