Ben Fletcher added to his 2018 medal haul and took bronze at the Grand Prix in Antalya Turkey this weekend, the IJF report on the U100kg Men noted the following:

Junior World Championships winner Zelym KOTSOIEV (AZE) won a rematch of 2017 Junior Worlds final to become a two-time Grand Prix winner. The confident 19-year-old saw off Junior Worlds runner-up Arman ADAMIAN (RUS), 21, who was making his first start on the IJF World Judo Tour, while KOTSOIEV, 19, won the Ulaanbaatar Grand Prix in 2016. KOTSOIEV scored two waza-ari in a relatively one-sided final as the Azeri showed his superiority over his former junior rival and their intriguing series of contests may long continue on the senior stage. In the first semi-final World Judo Masters bronze medallist CIRJENICS Miklos (HUN) lost out to ADAMIAN by ippon. The Hungarian went for a ko-soto-gake and the Russian took control to drive his opponent over for ippon. In the second semi-final KOTSOIEV moved forward when Ekaterinburg Grand Slam winner Niyaz ILYASOV (RUS) had to forfeit the contest when he sustained a leg injury. The first bronze medal was won by two-time Grand Prix winner LKHAGVASUREN Otgonbaatar (MGL) as ILYASOV could not come out to contest the final due to an injury. The result was a much-needed boost for the Mongolian who had been without a medal since moving up to -100kg last year. The second bronze medal went to world number 10 Benjamin FLETCHER (IRL) who caught CIRJENICS with a ko-uchi-gari with one second left. Düsseldorf Grand Slam silver medallist FLETCHER kept working until the end and got his reward as he won by ippon and will be seeded for the European Championships. A tani-otoshi from the Hungarian was countered by Ireland’s FLETCHER to win his second Grand Prix medal in 2018.’ 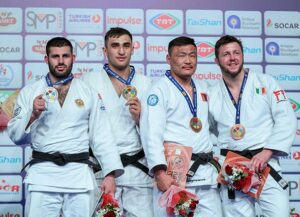