Earlier this month Mr Christy Fagan, Mr Liam Brennan, Mr Tommy O’Hara and the family of the late Frank Collinge came together to capture a history of the very early days of Judo in Ireland. Along with this history were countless photos and news articles gathering together and sent in to the judo Office last week. Thank you to Christy, Liam, Tommy & the Collinge Family.

The story of judo goes back a long way…

The story of Irish judo began in 1952.  It began in a mews building at the back of 12 Infirmary Road, just beside the Phoenix Park in Dublin. A few men, who had done a little judo in England came home, got together and decided to set up a judo club.  Easier said than done! In reality all these men wanted to do was to continue to practice the judo that they had started to learn in England. Their first problem was to find premises and this they did.  After much searching, they set up the first dojo in an attic at the rear of number 12 Infirmary Road, Dublin.

And so judo began, but not without a struggle, next they needed a mat, bearing in mind, this was a long time before modern tatami were available.  Even if tatami had been available, there was no money to purchase them, so they settled for a length of carpet laid down in an attic room measuring 12 feet by 15 feet. In modern terms, this is a smaller space than would be covered by 20 tatami today.  When you consider that today the minimum contest area is 8 metres by 8 metres plus a 3 metre safety area, which measures 132 square metres, the attic room was 20 square yards, needless to say, the facilities were woeful, no showers or any heating system.

Judo in the attic was for adults only. Christy Fagan tried to join as a 12 year old. He was told to come back when he was in long trousers. At that time boys wore short trousers until they reached their 14th birthday. At fourteen boys and girls could go to work, so the presumption in some quarters was that at fourteen you could be considered an adult 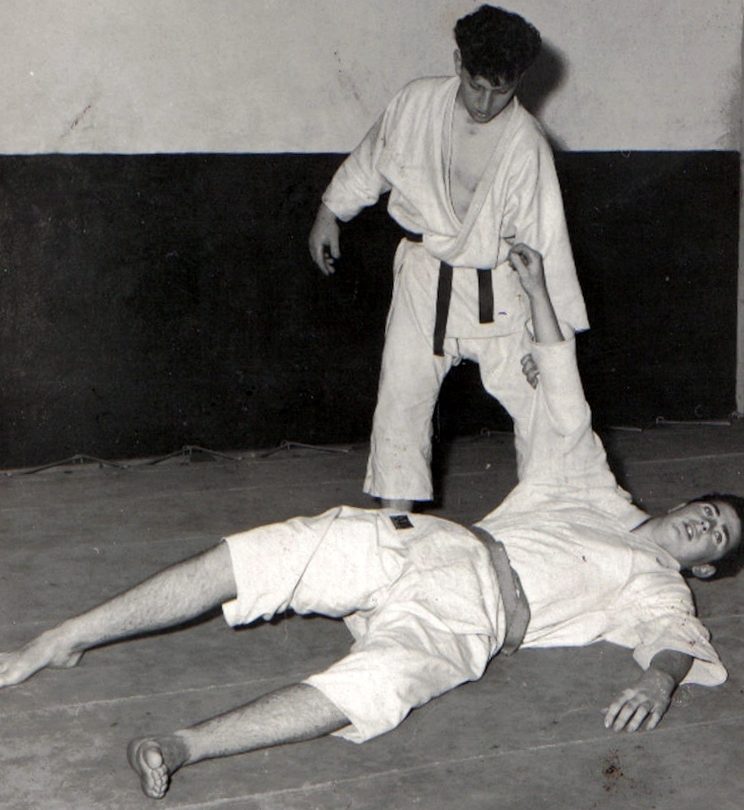 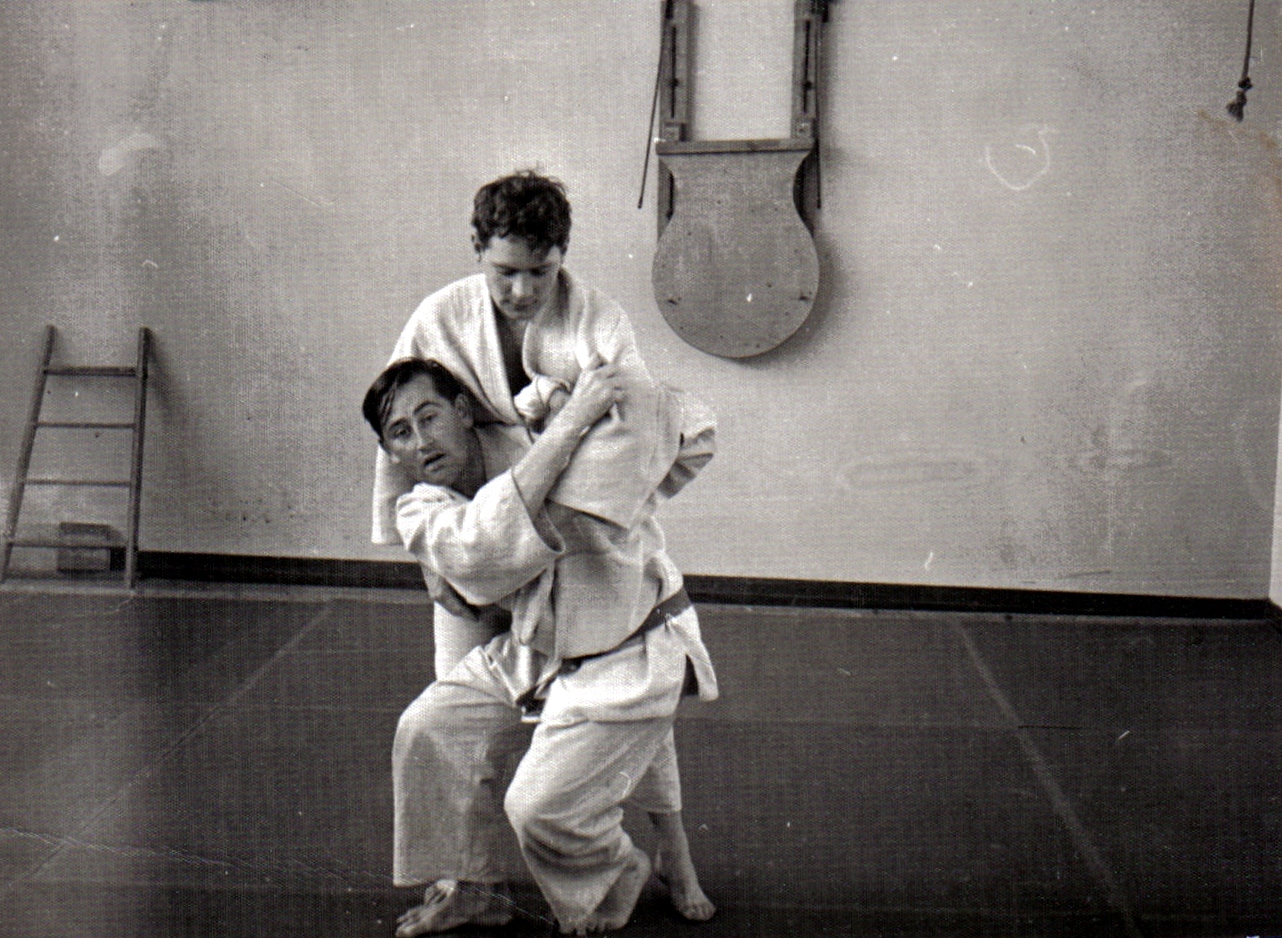 The men who brought judo over from Britain to begin with were interested in increasing their own skill levels. They wanted to continue to learn and advance to a higher grade, but to do this they needed somewhere to practice. A major problem, particularly when money was in short supply, but eventually premises was found and so, judo came to Ireland.  We must mention at this point that judo was already established in Northern Ireland. The first black belt on the island of Ireland was Gerry Nevin from Belfast. Gerry was very helpful in those early days, he travelled down from Belfast on a regular basis to conduct coaching sessions and run grading’s.  As a black belt he could grade up to a certain level, in the beginning as a black 1st Dan he could grade up to green belt 3rd Kyu. He ran many a grading in the attic.

At that time there was no governing body for judo in the Republic so the grades were registered with the British Judo Association.  This was not a problem as those who were now practicing judo in Dublin were already members of the BJA. The new men and women (yes there were women practicing judo in the attic) were able to grade under Gerry Nevin who was a 1st Dan with the BJA.

The BJA was of great assistance to the pioneers of Irish judo; they came over and conducted grading’s and coaching courses to help in the development of Judo the Republic. You must remember that there was no Irish Judo Organisation, it was not until 1963 that the Judo Association of Ireland, which was the forerunner of the Irish Judo Association was founded. Very famous judoka from the BJA came over, people like Charles Palmer, who was a 4th Dan at the time.  This was the same Charles Palmer who became Chairman of the BJA and a little later became president of the International Judo Federation and was awarded a 10th Dan for outstanding services to judo. Geoff Gleeson, who was also a 4th Dan and a very famous coach, ran numerous courses in Ireland over the years, but the first famous visitor to the attic was Charles Palmer.

It is hard to imagine today, what the impact would have been at the arrival of two high grade judoka to run classes and to grade the budding Irish judoka. These men and women, all of them low grades, must have been impressed.

It must have been very gratifying for the fathers of Irish judo to have such prestigious judoka coaching in their club. Con Maguire was the founder member of the attic, he and Christy Hanlon ran the attic judo club until Con went back to England, then it was left to Christy Hanlon to carry the judo movement in Ireland. Christy never got a black belt he reached the rank of 1st Kyu brown belt. He practiced in the old Daigokan in Killester for many years in a very social capacity.

But back to the attic; members of Christy’s family took up judo among the early members of the attic were Paddy Hanlon, Christy’s brother and Peggy his sister and many years later his nephew Keith Hanlon joined the Daigokan and went on to represent Ireland at junior international level. 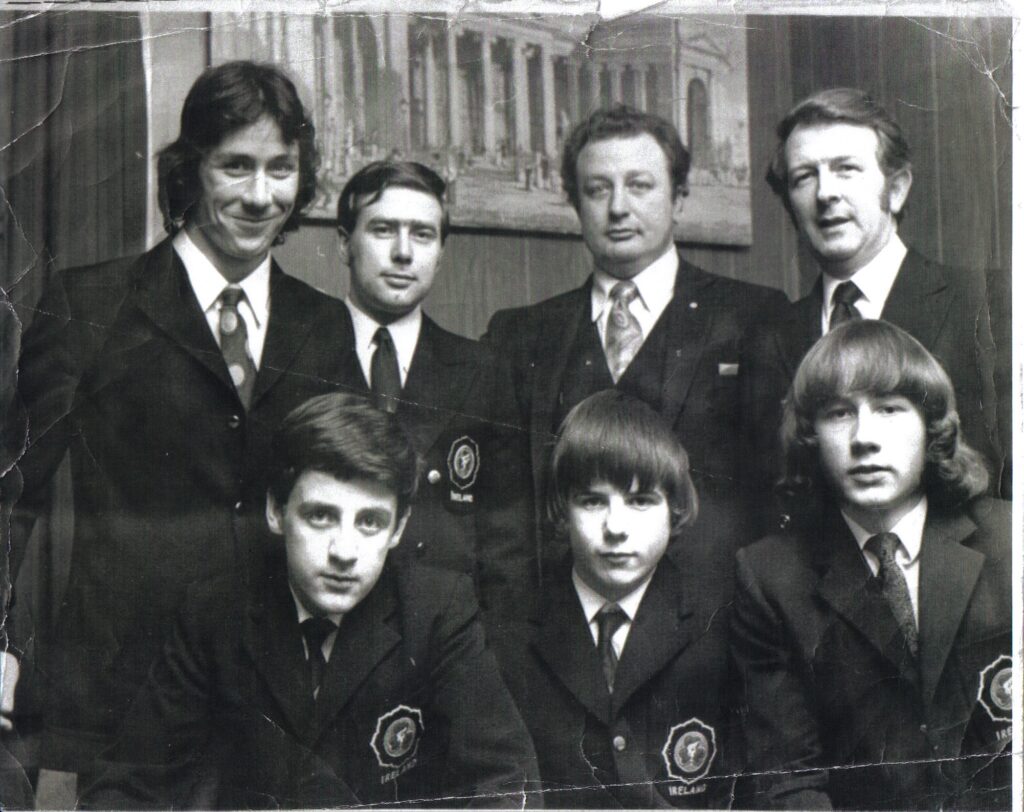 There is a story told by Christy Fagan: one evening two young men came along to join this mystical sport of judo, but unfortunately on that particular evening one of the players got a very serious nose bleed, there was blood everywhere and their fellow judoka were lowering this very bloody bundle down the ladder with the help of two judo belts tied around him, they lowered him down through the opening from the dojo to the dressing room on the ground floor. Can you imagine that picture! Needless to say the two guys made a very quick exit and probably took up a less bloody sport.

In spite of all the hazards, Judo developed gradually in the attic. It only took a small ad in the evening paper to attract a number of budding judoka.  You must remember these young men had no experience in judo but particularly had none in coaching. Frank Collinge took on the job of coach and mentor to a number of the leading judoka of the day such as Charlie Hegarty and the rest they say is history…