That feeling was back, that feeling I have not felt in over 18 months. The feeling of excited nerves. It was that feeling of night before competition day. I was so excited to return to the mats, competing and doing what I love most, the sport that fulfills my happiness.

The prep week for the competition meant many training sessions and recovery. It consisted of early morning training sessions before and after school, fitting in school work and most importantly recovery time. I hadn’t packed a competition bag in over twenty months! So, making sure I had every single item of equipment from judo license, a crisp white Judo Gi to water bottles and slides was nerve wracking enough.

We had flown out of Belfast City to London Heathrow the day before competition day. Once we arrived at our hotel, we dropped our bags to our room and straight to the closest supermarket to stack up on water and nutritious food to re-fuel after weigh-in. Once back in the hotel room it was time to chill out, think about some fighting sequences for competition day and get a good night’s sleep for a long day of fighting ahead. Competition day was only hours away.

Boom! 6:30am, it’s fight day. The nerves were running through me. I hadn’t had this feeling in a long time. I was so excited to step my foot back on the mats. Weigh-in complete, it was time to get into my competition mindset. The schedule for the day ahead was released. Seeing my weight category as the first to compete on mat five sent excitement through my body once again. The warm-up area was packed with judokas much like myself. Once warmed up I proceeded to mat five where shortly after my name was called, “Bethany McCauley- White.” My heart started to thump.  It was time to put all preparation from my Valencia, Spanish training camp and club training technical sessions prior to the competition into practice.   Tunnel vision set in once I stepped on the mat and rayed. It was only me and the other competitor. I won my first fight releasing all my nervous energy. Second fight I was more concentrated as all my nervous energy had calmed. Two wins down, I was feeling great going into the semi-finals, I got beat. The nerves came rushing back as I had one more fight left to prove to myself that I deserved a spot on that podium. It was the bronze medal contest. My stomach had butterflies. As soon as I gripped up, I felt back in my comfort zone. Two minutes into the contest I scored Waza-ari with a Sumi Gaeshi, I then proceeded into transition to win the bronze medal fight with a ten second hold down of Mune Gatame. A rush of emotions came flying to me, I felt over the moon.

I had won bronze, my first-time fighting in Cadets under fifty-seven kilograms and first time competing in over eighteen months.

The day wasn’t over yet, Juniors was still yet to come! Once again over the PA my category was called, I got the exact same feeling of excitement together with nerves. Winning three out of five fights and placing fifth in Juniors was a bonus.

Overall, I loved being back competing on the tatami competing and restarting. The day after the competition it was back to normality, more prep for the next competition.   I can honestly say, I couldn’t have done this without the support and coaching of my Coach, Paul Green! 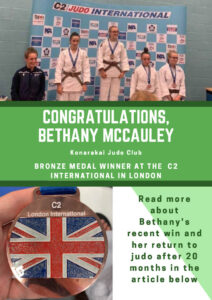