We had a pleasure to speak with Megan Fletcher recently about her life and judo, where she has come from, how things are going for her now and what the future holds.

Megan at age 31 is currently on an IJF world ranking of 20th place, giving her a very strong chance of representing Ireland at Tokyo 2020.  These Olympics will be held, of course, in the summer of 2021 in light of the Covid-19 pandemic. Megan is confident that the Olympic Games will go ahead and quietly confident of her place there. She will be fighting for Ireland with the tricolour on her judogi. Born in England to an Irish mother who emigrated from her Limerick home as a child, Megan chose representing Ireland as her pathway to Olympic selection.

For more on Olympic selection click the link: https://www.ijf.org/wrl_olympic?category=all&nation=irl&q_name=megan%20Fletcher

She has been training full time since the age of 18 but sitting behind the formidable Sally Conway of the UK in her weight division of under 70 kilos. When GBJudo required her to commit to living full-time at Walsall she knew she needed to find a different way forward. Her family connection to Ireland allowed a win-win situation to happen; Ireland has a top-class representative for selection for the Olympics and Megan found the stress of training at the number two spot fell away.  She can now train to beat the international women not her own and now former teammate.  She was happy to find the pressure was greatly reduced by her change in circumstances.

She enjoys having two coaches, pictured here, Ciaran Ward of Northern Ireland, experienced Olympic coach and Juergan Klinger who is now based in Germany.  Jurgen was formerly based at the University of Bath where Megan has been training for many years. (He was coach to Frank Wieneke who in turn coached Ole Bischof).  Megan says of Ciaran that he understands her well enough to rely on her judgement as well as having input into her training and plans. 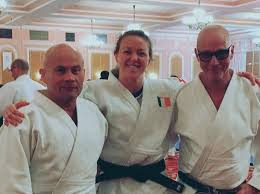 Megan agrees that her age is an advantage now having been in full-time training since the age of 18 and now has many years of international experience.  She is very familiar with the top-ranked players in her division internationally and is able to plan for every contest. She is a woman who appreciates the value of a good plan. The situation with covid-19 has been stressful for all our international athletes but Megan has a strength of character borne out of the depth of her skill set, her experience and her methodical approach to her sport.

She is excited about the training camps coming up in Europe in the next few months and about the level of judo she will find there.  Megan has missed being in tournaments this year, 2020. She says you need to compete to draw out that maximum effort you put into every contest.  We discussed how to describe what it is to fight in a tournament. The word aggression might be right, but it is that sense of leaving nothing out there when you come off the mat after every fight. Judo is a martial art, and we talk of ‘fights’ but it is a very measured intense mental battle as well as a physical confrontation in contest. The intense training you do prepares you for the competition but in competition judo you give your all. 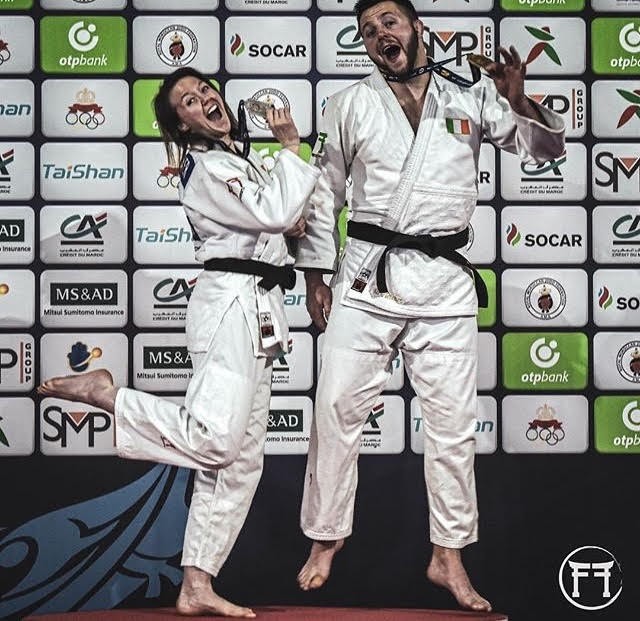 She talks warmly of her parents who run a garden centre and how she sees being involved in this family business in her future. She trains with her brother Ben and has been lucky to be able to continue this through the pandemic. It’s a special relationship and Megan values it very much.

She says she is very happy now with life and being a full-time judo athlete. I asked what does retirement from the sport mean for you. While acknowledging having a sense of a new and different chapter ahead Megan can see herself having coaching input somewhere in the future. Interesting…