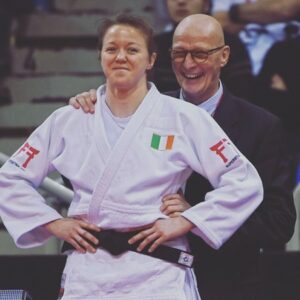 Fresh from a major tournament Megan is optimistic and raring to go.

The Doha Masters was not an easy event to compete at; for a start Megan was confined to her room at her hotel for 36 hours after her arrival while other athletes were working through their training routines within a few hours of arrival. Megan was unlucky.

Another required Covid19 test and a long wait, this is the life of an athlete now in 2021.

She has learned that social media is not for her during these periods of lead up to a tournament. Too much unnecessary ‘head noise’, she wisely turns off such distractions. Megan enjoys training in mindfulness and uses meditation to help her stay focussed and calm under stress. This is another mark of a high-level athlete, nothing is left to chance, no surprises are allowed in and when they occur, they are dealt within a controlled way.

It is undeniably a vicarious pleasure to discuss the details of a tournament with a world ranked player. The training, the build-up, the contests, the analysis – it feels like a front row seat in these judo starved times. It is Megan’s full-time career now as she counts down at last to her Olympic moment. The next few months will fly by, tournaments entered, and points clocked up to keep her on that track to Tokyo.

We talked about her fights at Doha, how did it go. Megan says she felt grounded and mentally ready to fight, compared to the feeling of walking out at the Europeans late last year feeling like a rabbit in the headlights, after the long absence from competition. In Prague at the European Championships, she said she felt like everything was happening at a million miles an hour, a sign of stress no doubt.

In Doha she felt in control, every exchange in a fight measured. In her first fight an early mistake which saw her go down a waza ari, was rectified in the exchange which saw Megan do an instantaneous counter for ippon against Greek woman Elisavet Teltsidou. She said that was a planned move in response to the known grips and attacks of her opponent. Megan said her earlier mistake which cost a score against her resulted from having two possible counters to the attack and she got caught in the middle of both. We laughed. Only because it worked out well on the second time.

In this circle of competitors, the players are well known to each other. Readily available videos of opponents’ fights allow for a game plan to be set up for the possibilities which will arise in a match. Judo, though, is a game of sudden death, hence the analysis of a fight in terms of each exchange and every time you take grips you have an opportunity to win. As does the opponent. Megan talks of her fight against Kim Polling of the Netherlands as knowing she was a dangerous, talented opponent but “everyone is beatable”. She describes Polling as a natural player with a gift for big throws but one who is less likely to win against an awkward player, as Aoife Coughlan proved later in the tournament. Megan’s fight against Polling was a tough struggle with Polling putting in an early strong attack with a low seoi, then a sacrifice attack and the left o osto gari which scored a waza ari for the Dutch woman. Through the fight Megan countered confidently in ne waza and survived a strong shime waza attack. Then, needing to get back with this score against her, she took her chance to surprise with a left ko ouchi gari but met a powerful counter which ended the match and the tournament for Megan.

Of the under 70kgs division Megan says this is a wide-open category in terms of podium finishes. There is a depth of players in the category that could put anyone in the medals in the Olympic Games, any one of forty players could be on that podium that day. For Megan there are preferred styles of fighters and no such thing as an easy fight. This is where, even for a very experienced competitor, a good coach relationship is so valuable. The coach who knows your strengths and weaknesses, guides you in planning and preparation, will anticipate problems for you and challenge you appropriately. A great coach is both a practical tool in the process of winning and a psychological bullet in your gun. Megan goes into the next tournaments on the road to Tokyo with all weapons loaded. We wish her well.