Condolences to the Bracken Family

Condolences to the Bracken Family

The Irish Judo Association was informed this afternoon of the passing of Mr Neil Bracken. We send our condolences to his family at this time.

Neil served as a committee member with the Irish Judo Association in the late sixties and early seventies.  Along with the late Charlie Hegarty and the late Paddy McMahon, he was involved on the committee that introduced the grading process into the Association at that time. Neil held the grade of 5th Dan. 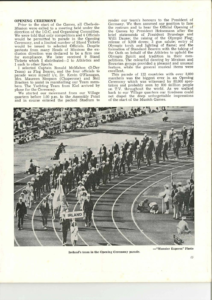 At the 1972 Olympic Games in Munich the Flag Bearer was Captain Ronald McMahon, Neil Bracken was one of the 4 Officials who have marched at the Opening Ceremony with Captain McMahon, where the Irish Judo Association had a team of five judoka in attendance at the Munich Games.

When Neil was a serving member of An Garda Siochana he founded the Garda Underwater Unit. As a qualified Pilot who flew an Irish judo team to compete abroad, he was considered to be a very interesting man.

May He Rest in Peace.

Funeral arrangements not published yet but this notice will be updated accordingly.